How to tell something unique about Superman’s origin, that hasn’t been said, contextually or tonally? Getting the right creative team surely helps, as “Superman: Year One” #1 can attest to. 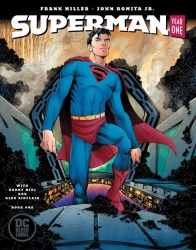 From the burning world of Krypton to the bucolic fields of Kansas, the first chapter of SUPERMAN YEAR ONE tracks Clark Kent’s youth in Kansas, as he comes to terms with his strange powers and struggles to find his place in our world. DC BLACK LABEL is proud to present the definitive origin of Superman as rendered by the legendary comics creators Frank Miller and John Romita Jr.!

DC’s ‘Black Label’ imprint was originally designed to tell stories with characters that were either outside of regular continuity, or with a tone that could be somehow more mature or in deviation to a traditional way those heroes are presented. So when Frank Miller announced a project under the label, with a possible association of the version of Superman seen on the seminal “The Dark Knight Returns,” it certainly drew attention. With the publication of its first book, it is still uncertain if the creative team has hit gold, but the groundwork for something memorable is certainly there.

John Romita Jr. may be more known for his Marvel work, but it quickly becomes obvious how passionate he is for this project, both in terms of the source material, and the influence and homages to Miller’s own work. The opening pages of “Superman: Year One” convey the last days (minutes?) of Krypton, from the perspective of the infant Kal-El. It is such an imaginative approach that it deserves further dissection.

First, the scale, that would already be tremendous if seen from an adult’s viewpoint, seem even larger from a young baby’s eyes. Each building towers just a little bit higher, explosions seem to take up the entire horizon. Later, when Kal-El is placed of his escaping ship, transparencies are added, just as the reflections of that boy appear on-screen… and on-panel. It immediately makes this a very personal escape and, even though readers are well-familiar that this baby will make it out safe and sound, the sense of anxiety is real. Add to that the use of panels and black spaces as young Superman blinks (and less of the page is seen), and these opening pages become a masterpiece on visual storytelling.

That level of craft should make readers pause when confronted with something that can be associated with an anatomic proportion mistake: head sizes for babies and young boys. While it cannot be said for sure, it is very unlikely that this is without intent. Every time Clark (now on Earth) is shown, his head is truly gigantic. It is portrayed to such a degree that it makes him fell… alien. Different from the rest. Removed, even if just slightly, which, intentionally or not, fits the narrative like a glove.

Romita Jr. paces the issue using very traditional page and panel layout, for most of it. On the second thirds of “Superman: Year One,” the story is as mundane and bucolic as it can be, so that more classic visual approach works well. That is not to say it is done without craft or attention: background characters and settings really make Smallville come to life, be it on school grounds or on the beautiful rendered Kent farm.

Miki on inks bring Romita’s art to a better level of contrast and definition, especially on the slightly darker moments, where shades and shadows are more prominent. Characters, in particular, benefit from this, seeming to step out of the page, almost detached from it.

But make no mistakes, this is a bright, colourful book, so the presence of three color artists should not be a huge surprise. Jokes aside, if the audience is not paying attention to the credit page, it might go unnoticed that three people are handling that aspect of the book. Sinclair, Steigerwald, and White transition seamlessly from one another, and do not detract from the overall experience to the slightest.

Miller’s script is incredibly subdued. Aside from the epic opening pages, the writer, famous for his political critique, war, and crime comics, seem to appreciate the opportunity of telling a coming-of-age story, set in rural America.

It starts with the narration. It’s voice is omniscient, and yet present. The best description might be that of an invisible narrator, one that is living alongside the action, but completely impartial to what is transpiring. That doesn’t stop it from almost cheering from time to time, from celebrating Clark’s smaller victories.

From there, Miller gradually reveals the balance of being an alien with a farm boy’s experience. It never stops being odd, like something out of the ordinary. It is actually hard to pinpoint how Miller did it, but the choice of Clark’s words, how Romita shows his facial expressions, it really comes together to present that sense of otherworldliness. Even when young Superman flies, it looks less like flying, but rather floating ominously.

Towards the end, when a new development occurs, it doesn’t come as a cheap reveal or twist, but rather something attuned to the sixty-or-so pages that precede it. Yes, it is not something readers have come to associate with Superman, but it feels absolutely in place for this version of the character, his experiences, and desires.

All in all, a great start. If the creative team can sustain this level of dedication and craft, this could be a classic in the making.

Final Verdict: 9.0 – Miller, Romita Jr., and team come out of the gates fast and strong. Anticipation for what comes next is high. Up, up, and away!