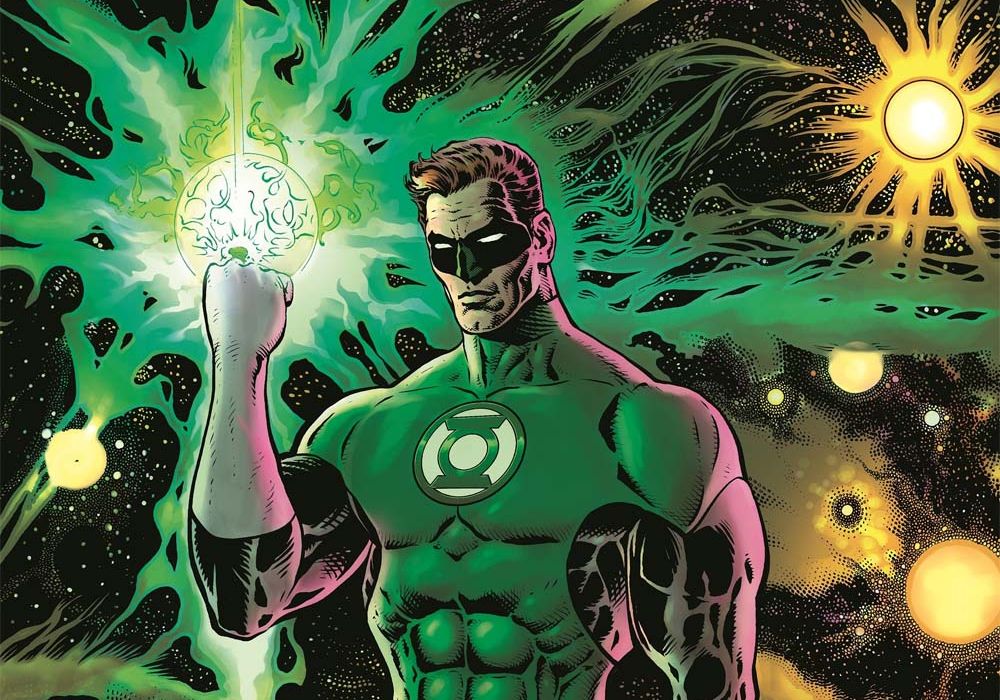 As the resident shaman of superhero storytelling, Grant Morrison likely needs no introduction for fans of the medium. His stewardship pf DC’s iconic characters have been hallmarked by a trippy zen-inspired pop psychology and a flair for bronze-age vérité crossed with silver-age ridiculousness, and he brings that trademark style to “The Green Lantern,” arriving on shelves this week to much fanfare and anticipation. So we don’t ruin even a little bit of the fun, this review is spoiler-free! 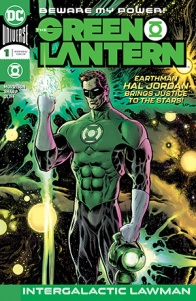 Superstar writer Grant Morrison (Batman, All-Star Superman) returns to DC alongside red-hot artist Liam Sharp (The Brave and the Bold, Wonder Woman) to launch a new, ongoing series: THE GREEN LANTERN!
In this debut issue, when Earth’s space cop, Hal Jordan, encounters an alien hiding in plain sight, it sets off a chain of events that rocks the Green Lantern Corps-and quite possibly the Multiverse at large-to its very core. There’s an intergalactic conspiracy afoot, as well as a traitor in the GL Corps’ ranks, so strap in for more mind-bending adventures in this masterpiece in the making.

From the onset, DC’s relaunch of their emerald-clad space cop embraces a throwback vibe. “Beware my power!” and “Intergalactic Lawman” are cheekily emblazoned across the cover and one halfway expects the top-heavy and bell jar-biceped “Earthman Hal Jordan” to be imploring cosmic ne’er-do-wells and readers to “Make his day” via a well-placed word balloon straight out of the annals of comic covers of the past. It’s the first of many endearing qualities of Morrison and Liam Sharp’s unabashedly retro reboot of the brash character that has often struggled to find his place in the second row behind DC’s iconic trinity.

Fans of Morrison will not be disappointed in his approach to the adventures of Hal Jordan that find him sidelined but quickly thrust into a cosmic conspiracy that threatens the universe as well as the corps itself. As usual, Morrison calls on the vast tapestry that is DC lore, but unlike many of Morrison’s other forays that might leave readers without an encyclopedic knowledge of the DC universe scratching their heads or scurrying to Wikipedia, this take on the titular character is instantly approachable. Where Morrison of old has often delighted in showcasing his breadth of knowledge of the forgotten corners of comics arcana to the casual reader’s detriment, this version of Morrison finds a way to welcome new readers without sacrificing his penchant for highlighting obscure four-color oddities.

“The Green Lantern” looks and reads like a comic from another era. It looks like a book that could have almost been produced in the non-digital age, and the read is punctuated by Morrison’s cleverly gonzo and deadpan dialogue and Liam Sharp’s busy and hatched but assured and elegant linework. The book also has a decided anti-sheen and does not appear to rely on Photoshop effects and shortcuts thanks to veteran colorist, Steve Oliff. Entrusted with many of DC’s post-rebirth Wonder Woman stories, Sharp’s work here is next level, and he is clearly comfortable in both galactic and earthbound settings. In space, each page explodes with almost claustrophobic detail while the earthbound scenes have a scope that works beautifully with the desert and small town backdrops. The book also jettisons formulaic and repeated panel layouts in favor of inventively geometric page designs dictated by the story beats. Each page turn yields a feast for the eyes. After a long career in the medium, Sharp might have found a project that will bring him the accolades he so richly deserves.

Editorially speaking, the pairing of Sharp with Morrison (both 2000 AD veterans) is inspired. Sharp’s comfort with wildly divergent settings and tones is a perfect fit for Morrison’s deceptively humble plans for the series, the space cop procedural. A Dragnet heart beats underneath this zippy cosmic veneer. You can already imagine Jordan dragging lantern-power shackled aliens into New OA precinct for processing. It’s exactly the kind of high concept that elicits excitement for the series as well as wonderment that someone hasn’t done it this way before. Morrison seems to be reinvigorated here by not being weighed down by event-level expectations and scope. The story’s focus feels sharp and unburdened by a need to tie this reboot into a linewide editorial mandate. It has more than a few darkly comedic laughs as well. Another throwback element is that Morrison’s first script is not content merely to set the stage for future installments. It accomplishes its exposition alongside a full throttle and self-contained adventure that wastes little time reaching lightspeed.

It’s hard to find a single misstep in “The Green Lantern” #1 as it seemingly does everything right to hook readers into this new series. It’s equal parts popcorn space opera and inventive intergalactic mystery. Morrison juggles the legacy of the character with a modern take that draws readers into a galaxy-spanning tale of intrigue with a provocative opening, an intriguing middle, and an ending that will have readers clamoring for more. Morrison also depicts Hal Jordan as brash without being buffoonish and prone to more contemplation and introspection than has been previously been hinted at with the character. Jordan will never be mistaken for having traits that make Batman the world’s greatest detective, but this first issue sets the stage for the adventures of the strong-willed, wise-cracking beat cop with boundless jurisdiction. While he may be just a piece in a larger interplanetary game, he’s an important one, and he’s not bad in a fist fight either. Giant green high fives all around for this thrilling first issue.

Final verdict: 9.5 – “The Green Lantern” #1 is not just a near perfect first issue, but it’s also a near perfect superhero comic, and it should delight both fans of the character and the uninitiated alike.