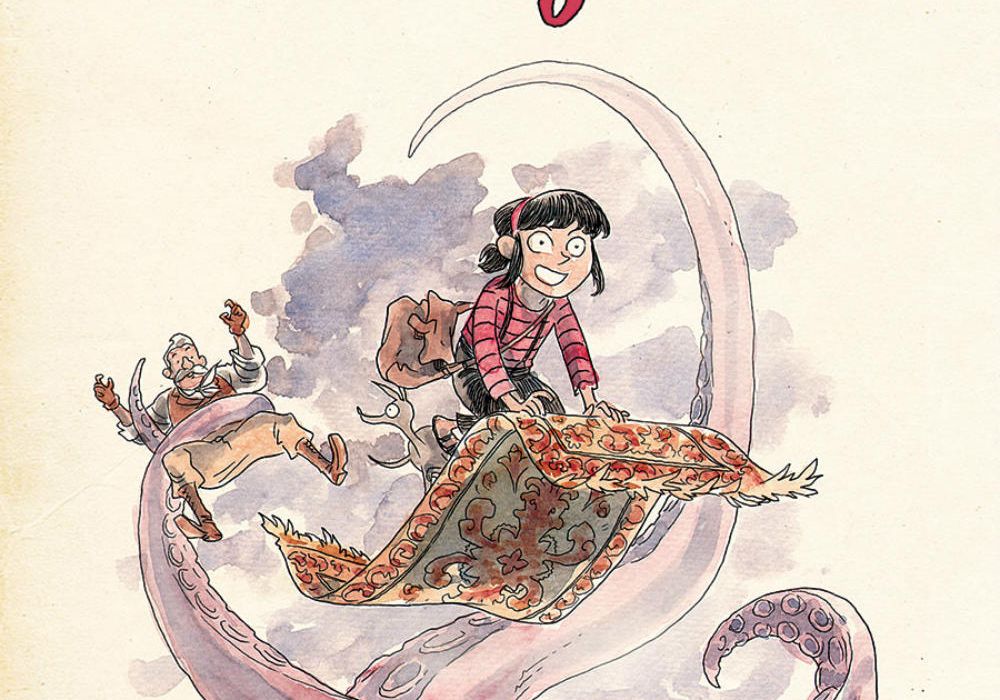 Matt Kindt and Brian Hurtt juggle lost relics, mysterious pursuers, giant monsters, and elaborate death traps, among other things, in their new book, “Poppy! and the Lost Lagoon” from Dark Horse. An all ages old school adventure, this graphic novel is imaginative and spirited throughout, fueled by a desire to do nothing but deliver an engaging and entertaining story. 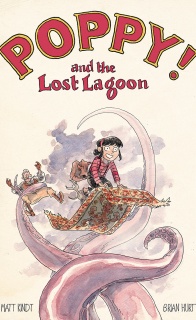 At the age of ten, Poppy Pepperton is the greatest explorer since her grandfather Pappy! When a shrunken mummy head speaks, adventure calls Poppy and her sidekick/guardian Colt Winchester across the globe in search of an exotic fish-along the way discovering clues to what happened to Pappy all those years ago!

“Poppy! and the Lost Lagoon” is an overall enjoyable comic book. It’s a little rough around the edges, but Kindt and Hurtt are trying to establish a world, introduce us to a new set of characters, and produce some exciting set pieces. Some stuff is inevitably going to be lost in the shuffle. Too bad it’s at the expense of the characterization.

The story focuses on Poppy Pepperton and her guardian, Colt, as they set off to figure out this cryptic riddle issued by a shrunken head. Poppy is the granddaughter of this old famous explorer, who disappeared under mysterious circumstances. She’s clever, headstrong, resilient, stubborn, short-tempered, and quick-thinking. In short, she’s the perfect sort to lead this narrative, someone easy enough for kids to identify with and likable enough for us to follow.

The plot and central mystery in “Poppy! and the Lost Lagoon” are fairly standard for the genre. A clue is discovered which leads them to a new location, where new clues are unearthed and they’re off again to another part of the world. There’s never a question of whether or not they should be doing all these insane and dangerous things, they sort of jump headfirst without thinking. Of course, Poppy and Colt have numerous resources to call upon — which Kindt and Hurtt maybe rely a bit too heavily on in the first half — which do produce some entertaining gags and running jokes. It’s as if during the story meetings, Kindt and Hurtt were trying to come up with every genre element they could and figure out how to pack it into this story.

For a time, though, Poppy and Colt are more archetypes than characters. It’s not until Poppy has her first truly bratty reaction to something that I felt like she was more than a figure we were watching stuff happen to. She grows more engaging and interesting after that, though it takes a while longer before we can understand Colt. There’s a Saturday morning logic to the story, providing plenty of pratfalls, set pieces, and humorous escapades. I dug how the eventual goal doesn’t involve them trying to take an item from a lost city, but rather involves them returning it to its rightful place. The character work takes some time to start going, and even now, I’m not sure there’s enough to distinguish Poppy and Colt from any other adventure serial team.

It’s the design and visuals that really distinguish this book and help it overcomes its conventions. The storytelling itself is assured and confident, the page structure accessible and well-paced. But by the time we hit the title page for the book, it’s clear we’re in for something spectacular. Kindt and Hurtt produce some of the most interesting and innovative looking comics on their own. With their combined talents, we’re given a book that looks truly fantastic. Hurtt contributes the line work while Kindt provides the colors and their approach is loose and expressive, inventive and dynamic. It reminded me a lot of the Quentin Blake illustrations for Roald Dahl’s novels, with an intoxicating playfull-ness and spiritedness.

At the same time, it’s never alienating or difficult to get through. Their approach remains constantly in service of the action, and it’s all the more effective because of it. Look at the sequence near the end of the second act, where Poppy and Colt get separated in a temple ruin or something. Hurtt presents the scene almost like a double page spread, mirroring Poppy’s actions on the left with Colt’s on the right, until they come together in a big splash. Or any of the background and expositional moments, which Hurtt delivers in this montage collage of images.

Matt Kindt and Brian Hurtt are such skilled storytellers they’re able to take all these familiar elements and remix them to feel mostly fresh and enthralling. The energy in “Poppy! and the Lost Lagoon” is high and it’s a fun read from beginning to end. It’s a nice testament to the serials that came before — from Indiana Jones to Tintin to Corto Maltese to Nathan Drake — while still able to stand on its own legs. As the series goes forward, I hope Kindt and Hurtt explore Poppy and Colt a little more, but as it stands, this is a very enjoyable and lively book.