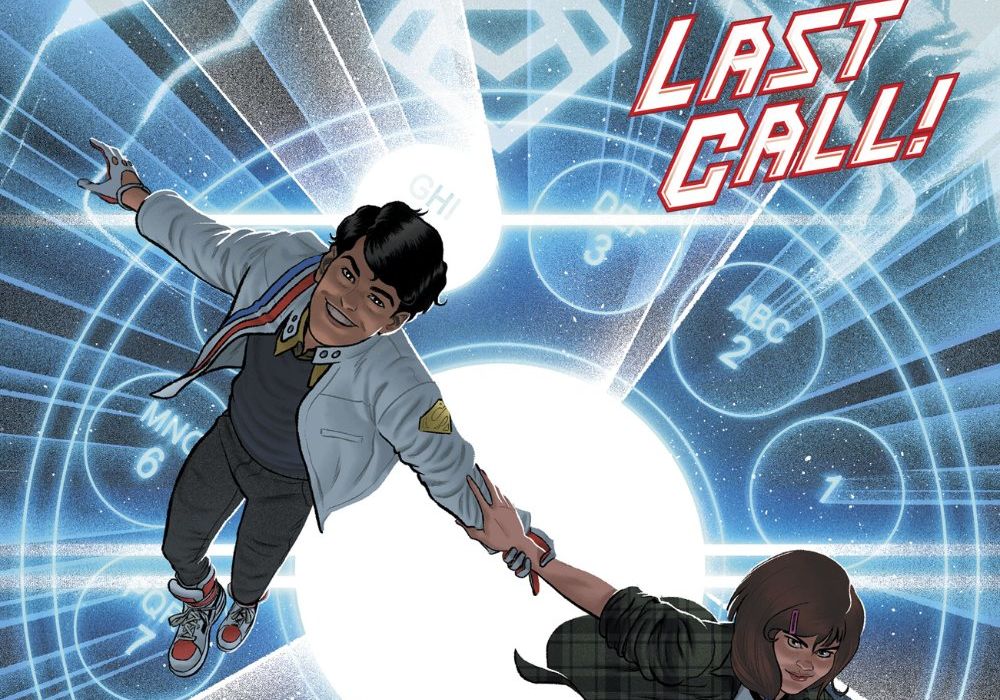 Sam Humphries’ “Dial H” series comes to a climactic conclusion. Does it call out to us as readers, or does it misdial at the last moment? We answer the call and review issue 12, so read on and see if it rings true.

Okay, that’s enough phone puns for one review. There may be spoilers, so be prepared. 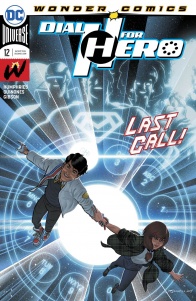 Miguel must face his most dangerous opponent yet-himself! With the fate of the Multiverse hanging in the balance, Miguel must battle his literal dark side. Will he and Summer survive the experience? And will the power of the H-Dial be lost for-ever? Find out in the thrilling conclusion to this innovative series!

The final issue of “Dial H for Hero” picks up at an intense spot in the story. Miguel has been split into two, Mr. Thunderbolt has access to the entire multiverse, and our protagonists are stuck in a void space called the K-Hole. All in all, it was quite the cliffhanger. Issue 12 has to resolve all of those issues and bring the story to a satisfying conclusion. So does it do it?

Of course it does. “Dial H for Hero” has been a well-written, well-paced and engaging story from its first issue to the last. Between Sam Humpries’ writing and Joe Quinones’ skill with a plethora of artistic styles, there’s never been a moment in “Dial H” that falls flat.

If we start by looking at the characters, we can see how much growth and development they’ve undergone from the start of the series. Their character arcs come to proper conclusions that let us see how much they’ve changed since the start, but more than that, it’s the fact that they’ve grown that allows them to succeed.

Certain thematic motifs have repeated throughout the run, and they come into play here. Losing one’s North Star, sharing the gift of hope, needing help, the nature of power, whether or not a hero can save everyone – all of these recurring themes and more come together in a natural way to help our heroes succeed.

Meanwhile, the antagonists play an equally important role from a physical and metaphorical perspective. I hesitate to call them “villains,” because their intentions aren’t evil – perhaps more than misguided, but not necessarily inherently selfish. Mr. Thunderbolt wants to give superpowers to everyone in the multiverse; he’s driven by his own regrets and a misguided idea that everything would be better if everyone had powers. Meanwhile, Thunder Montez is a literal manifestation of Miguel’s own doubts and fears – his own self-loathing made real.

These are the obstacles Miguel and Summer must overcome. While they are absolutely physical threats they have to face head-on, what they represent is more important for the story and characters. That’s some high-quality character and story work right there.

At the same time, the story plays on elements that can only be found in comics. Without going too far into spoilers, Mr. Thunderbolt’s final fate is just a tad bit meta, but incredibly fitting. It’s not exactly subtle that his desire to be powerful proved to be his own downfall, but it plays out in a thematically fitting way.

But for as much as I can talk about the character work alone, equal credit must be given to Joe Quinones’ artwork. Throughout most parts of the comic, it’s a bold and clear style, with strong linework and expressive character designs. His style of art is the kind I’d be happy to see in nearly any mainstream comic, given the solid, expressive character designs and the way he uses the panel size and space to pace out each scene.

But “Dial H for Hero” isn’t just any comic. It’s a comic that takes styles and designs from the wide world and history of comic books and uses them to great effect. Joe Quinones encapsulates that in his artwork, which can shift, blend, and contrast multiple styles and designs as needed.

Take, for instance, the climactic showdown, as Summer and Miguel shift between multiple art styles and transformations. We get them as sketchy-looking black and white cartoons, multiple retro-looking characters colored using Ben-Day dots, and designs that could be taken from “Elfquest” or even the “Scrooge McDuck” comics. That’s just to name a few, and issue #12 is far from the only one to do this. Throughout the comic’s run, we’ve seen sudden shifts to any style you can imagine, from manga to indie comics.

The artwork and amazing variety of characters act as a tribute to not only DC’s comics, but to the world of comics as a whole. There’s a tremendous amount of love and care put into every character design, every homage, and every stylistic choice. It comes through in a fantastic conclusion.

Not only does “Dial H for Hero” #12 tribute comics visually, but thematically it also focuses on one of the elements that makes comics so appealing and enduring. As the conclusion nears, we’re treated to a fleeting history of key inspiring moments in comic book history, moments that define the characters in one word. (I won’t say what word exactly to avoid spoiling too much, but you can probably guess what it is.)

Is this the last we’ll see of Summer and Miguel? No, they’re already appearing in “Young Justice,” so we can look forward to seeing more of them and the many heroes they can become as they fight alongside other characters. But even if this were the last we see of them, it would be a fantastic conclusion to the story. It’s a comic filled with passion, creativity, and a love for what these heroes represent.

Final Verdict: 9.0 – A perfect conclusion to a great comic, bringing together all the thematic elements and ending on an excellent note. The story was expertly written and paced, while the artwork captured whichever style it needed to for the multitude of characters flawlessly.