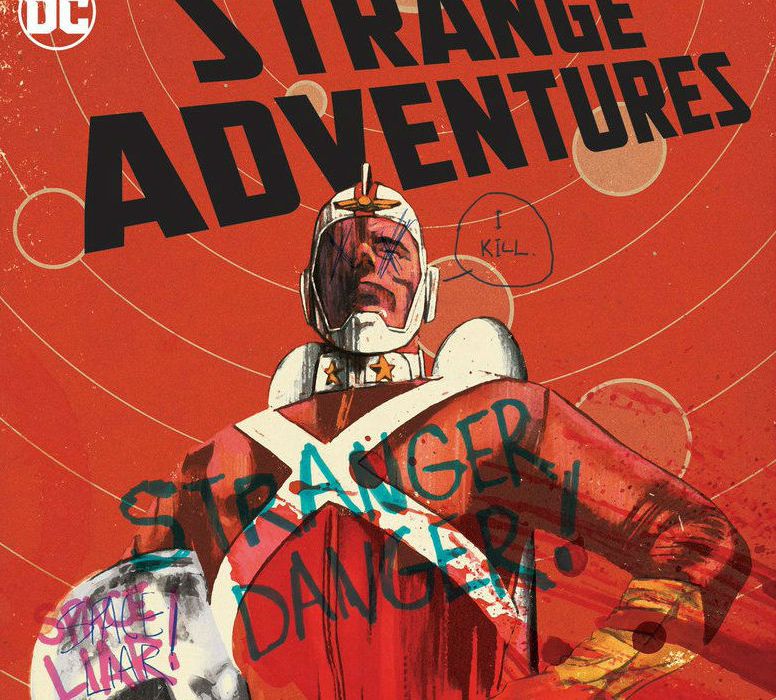 Tom King has made no bones about the fact that he works out real world things that are on his mind through his comic book stories. He also clearly has an affinity for the 12-issue series and taking a B or C-list character and putting them through the ringer. With the exception of the polarizing “Heroes in Crisis” (coincidentally not a 12-issue series), the two calling cards have served him well both critically and commercially with “The Vision” and “Mister Miracle,” and his partnership with Mitch Gerads, begun with the stellar “The Sheriff of Babylon,” hasn’t hurt the cache or advance seal of approval that his projects now carry. I mean, get a load of that solicitation text! It almost feels like a disservice to readers to go along with this kind of hucksterism, wishing for a time when products had to be consumed before being placed in the pantheon of all-time greats. If you think that’s too meta for a review of “Strange Adventures” #1, the metatextuality of this review and the subject of it is only just beginning. 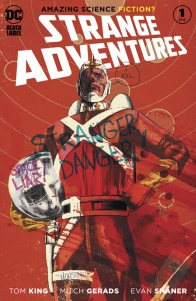 After winning five Eisner Awards and topping year-end “best of lists,” the comic book of 2019 was Mister Miracle. The comic book of 2020 will be Strange Adventures.
The Mister Miracle team of writer Tom King and artist Mitch Gerads are joined by fan-favorite artist Evan “Doc” Shaner to bring you an epic tale in the tradition of Watchmen, The Dark Knight Returns, and DC: The New Frontier-a story of blood, war, and love that readers will be talking about for years to come. Adam Strange is the hero of Rann, a man famous throughout the galaxy for his bravery and honor. After leading his adopted home to victory in a great planetary war, Adam and his wife Alanna retire to Earth, where they are greeted by cheers, awards, and parades. But not all is as happy and nice as it seems, as the decisions Adam made during battles on Rann come back to haunt his family and threaten the entire DC Universe. And now a surprise DC hero will have to choose between saving Adam Strange and saving the world.
A story like no other, Strange Adventures is an ambitious, thrilling, shocking, and beautiful 12-issue saga that will push Adam Strange to the breaking point-and beyond!

In the time-honored tradition of getting the bad news first, it’s best to get this quibble out of the way before moving on to the triumphant first issue that this is. At the book’s conclusion there is a nagging feeling that “Strange Adventures” is plucking elements from King’s other stories, namely heroes getting framed for murder and war juxtaposed with domesticity. Even Adam and Alanna together feel a bit like Scott and Barda. Adam on his own has a similarity to Booster Gold, one of King’s favorite DC characters. These similarities don’t hamper the enjoyment of the book, but there was enough there to make this reader point it out. If anything, King actually seems to be making a point to address some things here that he hasn’t in other stories, particularly the publicity machine and news outlets. When Adam goes looking for help to clear his name versus trying to do it himself, it feels like someone lawyering up, and there’s an intriguing plot development that gets us to the final page introduction of another supporting character from the DC universe that had long since been spoiled by the DC’s own publicity apparatus that’s enough to make someone swear off reading or keeping up with these types of things. Our stories would be better for it.

The good news is that the book sings. King and Gerads continue to earn their growing reputation for consistent storytelling excellence, and the addition of Evan Shaner to the team does nothing to take the shine off their partnership. Shaner’s panels enhance the proceedings in the most natural and organic storytelling way. Shaner handles the scenes on Adam Strange’s adopted planet of Rann in an almost storybook fashion while Gerads handles the grittier Earthly chores. In another boon to the story’s readability, the team of King and Gerads resist the urge to use the 9-panel grid, a calling card that, despite their mastery of it, could have easily become an overused feature of their collaborations. Only two appear in the story’s 32 pages and one of those two is just a quirk of design where six of the panels could have been combined into one. It’s a nice nod, but the story benefits from the use of big and mostly horizontal, cinematic panel layouts by Gerads and Shaner. Whether it was a handshake agreement to create less work for the artists and to avoid delays, the first issue benefits from the panel variety. There are two horizontal panels from Gerads in this issue that depict Strange’s trademark rocket pack lying on a bed, and they may be among the most clever panels that Gerads has ever constructed… until you see the outdoor lighting effects at the restaurant patio scene six pages later. He continues to outdo himself with his digital art inventiveness.

At least at first, King seems to be sidestepping antiquated parallels to the difficulty of a soldier returning home or fitting back into ordinary society. That’s familiar territory that’s been handled before in fiction and film. Here he seems more concerned with the stories that we create to navigate life upon that return. As fans wait online to have Adam sign his book eponymously named Strange Adventures that sports the variant cover of “Strange Adventures” #1 by Shaner (clue!), Strange parrots the same line over and over again. Is it simply a canned, conditioned response or something more sinister, a tell that he is covering up something traumatic that is gnawing at his conscience even as he is celebrated as a hero. Is Strange Adventures the story that Adam has told himself to cope with loss and move on, or is it an effort to get out in front and control his own narrative in the world of social media immediacy? There’s a casualness to the way that Adam and Alanna go about their celebrated lives that stands in stark contrast to the heightened tension and drama of the battle with the warring Pykkts on Rann. There is a moment halfway through the issue when Alanna seems to break character, shifting from upset to defiant in the wake of allegations against Strange. It’s subtle, but in a book where its dramatic power is derived from subtle moments, one gets the feeling that its better to pay attention to those clues and not be distracted by the media spin. Just like in real life.

Final Verdict: 9.0 – If you can overlook the DC hype machine’s hard sell in the wake of their other recent publicity tomfoolery, “Strange Adventures” #1 seems to be the start of another winner from Tom King and Mitch Gerads. Evan Shaner’s contributions are excellent as well, and the whole thing feels important by not trying to be, a sin perhaps committed in the creation of “Heroes in Crisis.”