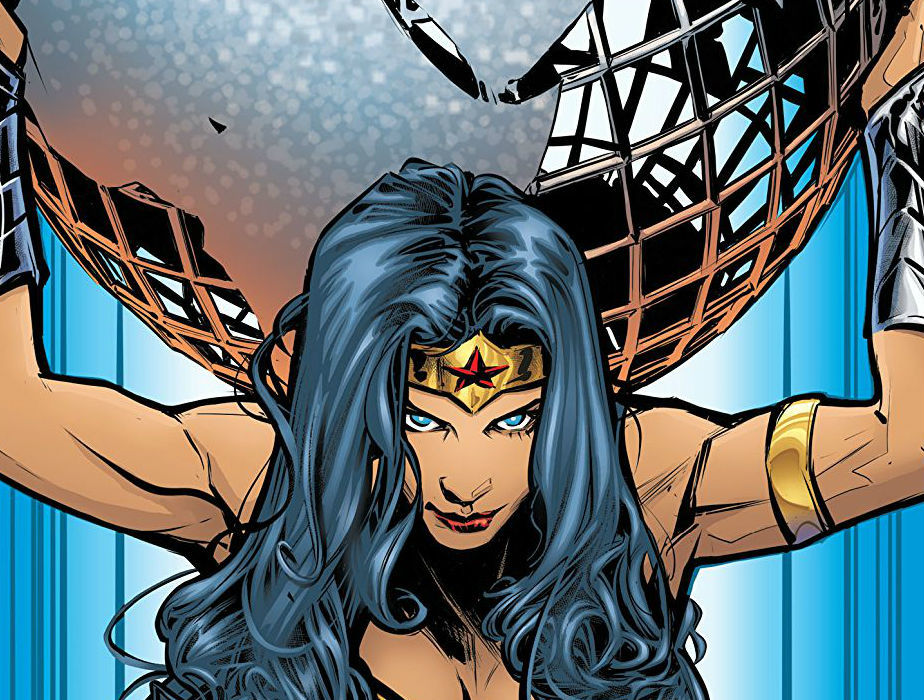 Celebrate 750 issues of the fiercest diplomat of the DC Universe with a collection of stories that highlights the best of Diana Prince. 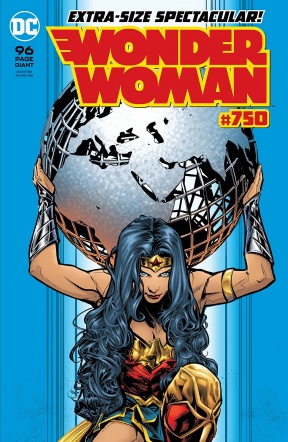 An all-star 96-page celebration of the Amazon Princess by longtime favorites and acclaimed new voices! In the lead story, Wonder Woman’s epic “Year of the Villain” battle comes to a close, leading the way to new challenges ahead. Additionally, this oversized gem tells tales from Diana’s past, present and future by some of the greatest storytellers in the business- including Colleen Doran, Mariko Tamaki, the Teen Titans: Raven team of writer Kami Garcia and artist Gabriel Picolo, and legendary Wonder Woman creators returning to the character, including Gail Simone and Greg Rucka!

If Superman stands for Truth, Justice, and the American Way, Wonder Woman stands for love.  Whether she sought peace or war, whether her weapon was a sword or a pen, love — and her love for humanity – – remained at her core. “To be human is to love, even when it gets too much,” as Sia’s song goes on the Wonder Woman soundtrack.

And that is what DC honors and celebrates as “Wonder Woman” reaches its 750th issue, with a murderers’ row of talent given that singular marching order: whatever you write about the Princess of Themyscira, let it lead with, and be about, love.

It’s tempting to look at these oversize anniversary issues as self-indulgent fluff and an interruption to the high stakes ‘Year of the Villain’ event. So it was a smart move to include the conclusion to Wonder Woman’s ‘Year of the Villain’ story here, and writing it in such a way that it works as both standalone tale and conclusion to the arc. As someone used to Steve Orlando’s slower pacing on “Martian Manhunter,” his finale to “The Wild Hunt” leaves little room to breathe, closing things out at breakneck pace with the door barely shut on Cheetah’s crimes before Diana finds herself no longer the accuser, but the accused.  Artwork from Jesus Merino, Vicente Cifuenes, and Romulo Fajardo Jr. shows it can keep up: cutaway panels that allow you to see action scenes from a variety of angles, mixed with close ups for emotional moments, all rich in subtle, styled detail. There was not enough here to make this finale (17 pages) its own issue, and I will gladly have some moments of literary whiplash rather than a watered down, padded book to fill out a page count.

The rest of these stories have their own unique charms. “From Small Things, Mama” by Gail Simone and Colleen Doran, reminds Diana to love herself and practice that self-care when you need it, hallmarks of Simone’s tenure writing the character. It’s a charming, maternally-toned team-up with young Star-Blossom brimming with the optimism and hope of a child who has lessons to teach. With bright colors that pop off the page and simple linework, you can’t help but crave more of Star-Blossom and Diana Prince adventures.  (Take note, DC Kids and Wonder Comics.)  “Emergency Visit” from Shannon Hale, Dean Hale, and Riley Rossmo puts a fun twist on the parent who just wants some time with her very busy child. Unfortunately, the block artwork style with minimalist detail proves distracting from the script’s message. The eye and brain spend more time filling in artistic detail and making sense of shape than absorbing words.

Of course, there are the testimonials of the effect Wonder Woman has had on people’s lives, the love she shows to others. Marguerite Bennett revisits her DC Bombshells character in “To Me,” letting each tell her story about just how Wonder Woman made them each for the better. Vita Ayala and Amancay Nahuelpan show the importance of tough love as a form of love in “Always,” facing down her former friend Silver Swan in a fight that proves both physical and mental for each of them. Like “The Wild Hunt,” “Always” features mix of close ups and wide angle shots that emphasize the duality of torment for Vanessa Kapatelis/Silver Swan (and to an extent, that same duality of torment for Wonder Woman), artwork keeping up with the fast-paced script efficiently and effectively.

As with any anthology, some stories prove weaker than others.  Greg Rucka and Nicola Scott’s”Never Change” has a supernatural tone that doesn’t seem to fit in with the idea of Wonder Woman, but they manage to stick the landing in the lesson in that love, and loving someone, just doesn’t always make sense.  Scott Snyder and Bryan Hitch have fun in a period story at the 1939 World’s Fair, “A Brave New World” that provides an origin story for Diana in America.  But that story, while fun, doesn’t really present anything new, doesn’t seem to touch too deeply on the theme of love, and features an oddly placed cameo that suspiciously resembles Green Lantern.

It’s no coincidence to me that “Wonder Woman” #750 arrives a few days after Martin Luther King Jr. Day here in the United States, a day honoring a man who had the concept of agape love – – that love that transcends and persists time and circumstance – – at the core of his life’s work. Over her nearly 80 years of existence, from warrior to lover to detective to diplomat, Wonder Woman practiced that agape love.  She never gave up on us, no matter how hard we humans made things for her. And that is her most indestructible weapon.

Final Verdict: 7.7 – A well-executed celebration of the essence of Wonder Woman and all that makes her so great.