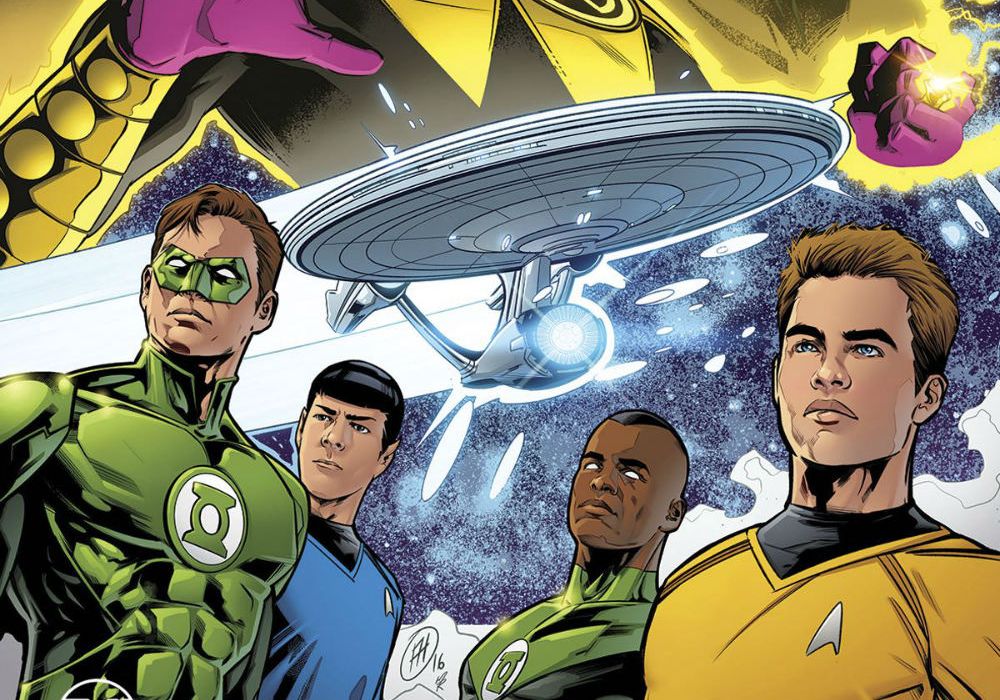 It’s crossover time! More than that, it’s sequel time too! Yes, it’s a rare crossover that does well enough to warrant a sequel, but we have one now, as Hal Jordan and his fellow Lanterns continue to join the Starship Enterprise in their quest to go where no one has gone before.

Of course, “where no one has gone before” still has spoilers so be aware. 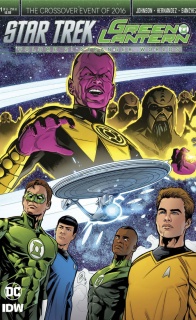 Written by Mike Johnson
Illustrated by Angel Hernandez
The galaxy-spanning crossover epic continues in this sequel to the blockbuster STAR TREK/GREEN LANTERN: THE SPECTRUM WAR! Captain Kirk and Hal Jordan lead the combined might of Starfleet and the Lantern Corps on an all-new adventure against new foes from both franchises! Don’t miss the crossover event of the 21st Century…and the 23rd!

The previous “Star Trek/Green Lantern” crossover comic (“The Spectrum War”) was surprisingly good, for the most part. The series mesh well enough, as they both span through space and feature leads who seems to enjoy breaking the rules but somehow always succeeds with a bit of luck, wit, and charm. It was neat seeing which Star Trek characters would wind up with what ring, which is all well and good for a fun little crossover.

But was it good enough to warrant a sequel? While I felt the first one brought the story to a satisfying conclusion, they did leave enough potential plot threads hanging to take the story in any number of directions. What one did they take?

Well, they realized that while several Green Lanterns (and one other Lantern of every color) got punted into the Star Trek universe, they left something important behind. More specifically, they didn’t bring any actual lanterns with them.

Really, that’s something of an oversight from Ganthet. When you’re sending the last remaining Lanterns away on a last-ditch effort to save them and help defeat a force of death itself, including their power batteries so they can recharge now and again might be a good idea.

Still, the surviving Lanterns have to adapt to the idea that they’ll soon be without their powers, and their rings are already starting to give out.

This is particularly unfortunate for any Lanterns who happen to be in the middle of outer space, such as Hal Jordan. Naturally, Hal’s not the type to let something as minor as an increasingly high chance of dying in the cold voice of space stop him from flying around and saving the day. It made for a good character moment when he struggled to maintain his constructs until everyone made it to safety, even as his own Green Lantern uniform began to fade away; it’s a classic moment of Hal Jordan being recklessly heroic, but doing so in order to save others at any cost.

On the flipside, we have the hilarious revelation that Sinestro has once again managed to take over an entire planet by being awesome enough to literally beat it into submission. Mind you, the planet in question is Qo’nos, so earning a seat of power by killing everyone above you is the Klingon way, and ruling with an iron fist is far more acceptable there than on most other worlds.

It’s interesting to see Sinestro hit the moment of “I’ve conquered an entire world… what now?” that we so often see whenever a villain succeeds. It’s one of those cases where victory can be boring, but with just a hint of Sinestro knowing that he doesn’t have enough power left in his ring to conquer any other worlds on his own. Even the scene showing him alone in his palace is wonderfully illustrated, with tall panels showing off the height from which he stands, but shadowed and thin to illustrate his isolation.

Aside from those two, the issue mainly serves to catch readers up with what all the characters have been up to since the last run ended. The remaining Green Lanterns are helping out Starfleet in one way or another, and the replica rings created in “The Spectrum War” are still being used by Starfleet security. Some are adapting to life in the new universe better than others, and to everyone’s surprise, Carol Ferris and Scotty are now an item.

I can honestly say I didn’t see that coming.

Aside from the catching up, the story itself doesn’t really kick into gear until right around the end, but then, it is just the first issue. What they give us raises plenty of questions, and creates an intriguing hook for the next issue, so it serves its purpose well.

Story aside, the issue is filled with excellent artwork. Angel Hernandez does an excellent job of making the characters from “Green Lantern” look perfectly in-place in the Star Trek world, with solid character designs for characters originally from comics or film alike.

As it is a “Green Lantern” comic, use of color is important as well, and the color work from Alejandro Sanchez does that well. The vibrant glows of the lantern constructs stand out against the clean backdrops in Starfleet Academy and the spaceships, while the clean lighting from those contrasts with the dark skies of Qo’nos.

Perhaps the most stunning scene comes with the Enterprise’s rescue of Deep Space Station K-5. It’s there that we get the aforementioned scene of Hal struggling to maintain his construct with a dying ring, but the entire scene is drawn to perfection. The impacts and burning streaks from meteors crashing into the base, with scattered panels showing characters struggling to come to the rescue while disaster fills the page, all add wonderfully to the scene. The action is paced perfectly, and the scene serves as a great reintroduction to both the crew of the Enterprise and Hal Jordan.

Overall, while I’m still not sure a sequel was entirely necessary, I can’t fault them for doing a good job. It’s a solid re-introduction with excellent artwork, and may show us just how far this unexpectedly good crossover can go.

Seriously, though, Carol and Scotty?

Final Verdict: 8.1 – A good start that provides a nice introduction to both characters and story, with excellent artwork every step of the way.