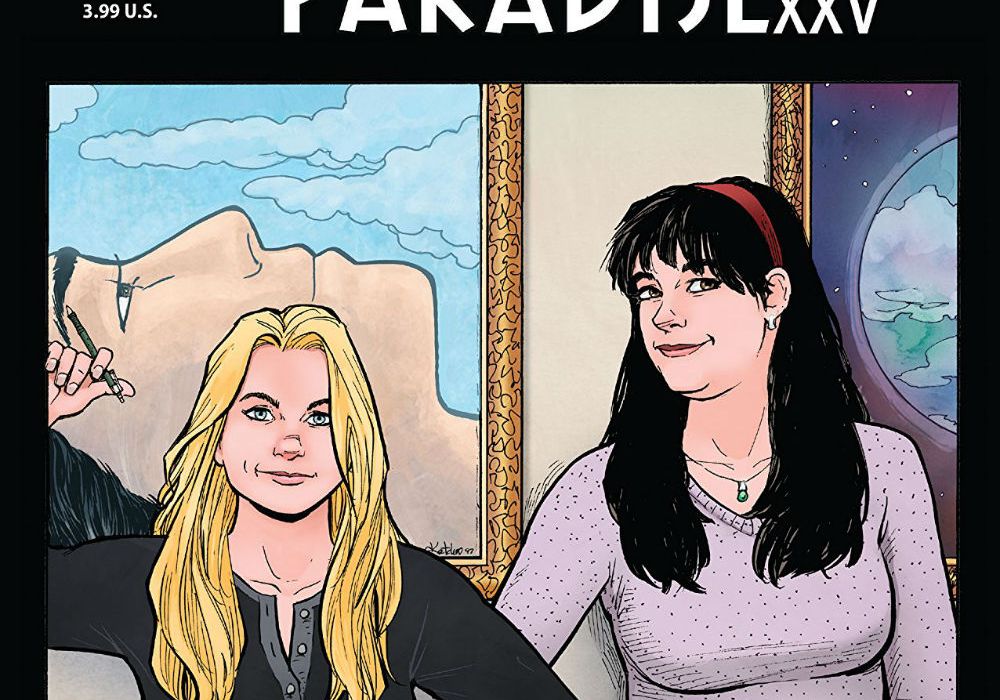 And thus, the final issue of “Stranger in Paradise XXV” comes to a close. Not with a bang, not with a whimper, but with an open door and a promise of more to come. 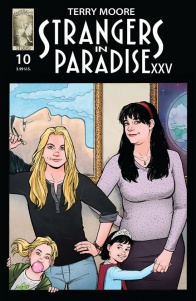 Following a stunning revelation, Katchoo heads home to rejoin her family but a dangerous intruder has invaded the house and now holds Aunt Libby and kids hostage. Don’t miss this thrilling conclusion of the XXV series!

One of the hardest parts to accept about “XXV” is that the series is, one, finite, and two, not the same project as the original work.

“Strangers in Paradise” was the story of its three leads, Francine, Katchoo, and David, positioning Francine as the center but granting equal, if not greater, developments to the others. It was about the messiness of growing into adulthood, of broken pasts and learning to live life with all its hardships and heartaches. It was a story all about characters colliding, falling down, and getting back up again. Sometimes with a huff. Sometimes with an outstretched hand.

“Strangers in Paradise XXV” is, instead, a world tour, bringing together all of Moore’s disparate stories, positioning this to be his biggest story yet. In fact, it’s so big, that by the end of this issue, the plot isn’t actually resolved. The inciting incident, specifically that of Stephanie and her threats, is resolved but the resolution to that narrative must occur elsewhere; the instructions of the story demand it. This isn’t an “Echo” story or a “Rachel Rising” story or even a “Motor Girl” story, it’s a “Strangers in Paradise” story, and, more specifically, Katchoo’s story. Thus, it begins and ends with her involvement, everything else be damned.

By doing this, the series is able to retain a sense of closure and completeness that would otherwise not be present. As a concluding issue, “Strangers in Paradise XXV” does everything it should. It provides a quiet denouement to Katchoo’s quest around the globe and brings her home with a renewed sense of purpose. And thus, despite the huge scope and scale of the narrative, this is Moore’s smallest story. The thematic arc of the series is centered on Katchoo and the question of how much she has changed since starting a family with Francine. Has she left her old, destructive ways behind?

Five issues ago, the answers weren’t clear. She still felt she had to go at this alone, to keep much of her adventure secret from Francine. Until the second page of this issue, Katchoo hadn’t even spoken to Francine since she left but now, she answers the phone on the second ring and promises to tell her everything once she’s home. The revelations of issue #9, and of the whole of the series, has made her realize where her priorities need to lie.

Moore sells all of this through his stellar drafting ability, his character work, and his gorgeous lettering. Moore imbues every word, every balloon, every sound effect with an energy that you only see in indie B&W titles like this or “Finder.” It’s most apparent when he conveys intense emotions, the sharp balloons and scratchy letters permeating the panels with terror and anger. They command your attention but never at the expense of the art. It is meant to highlight, not distract, and in that, he succeeds.

Take the first panel of page 8. Koo & Ashley are inside the vents, with Ashley yelling that she’ll call the police. The balloon and lettering are in your face, jagged and large, while Ashley’s face is determined and furious. However, centered in the image is Koo, who has a look of pure terror on her face along with a single tear. Neither of their faces are exaggerated but the depth of the emotions can be felt from that one image.

A couple pages later, Koo and Ashley are in Aunt Libby’s arms. Koo is holding on tight, still terrified, wanting only to see her moms again while Ashley has already bounced back, exclaiming she wants to be a marine. It’s a small moment but the consistency of character deepens the impact of the preceding scenes as, even though we have spent very little time with Koo and Ashley, it does not matter. They are as important and real as their moms, with the weight of their history fully present without ever being laid out. It is these moments, the quiet ones that show us who these people are, rather than what is happening, that provide the heart and soul of “Strangers in Paradise XXV.”

I have spent much of this review praising “Strangers in Paradise XXV” #10 and while it is a beautiful book, and a satisfying ending to series, the plot held the series, and thus this ending, back.

The scenes with Tambi and Rachel are intriguing, and the characters are so strong that I could watch them make small talk over coffee for an entire issue and be happy. But the content of their conversation makes one long to return to the quiet, tender page of Francine and Kachoo in bed together, of the bittersweet warmth of their smiles and the mostly silent reunion that can only occur between two deeply connection people. The same is true for the scenes with Aunt Libby and Jocko (I think that’s his name.) It is the characters, many of which are not given nearly enough time to shine, not the surrounding content, that makes it worth reading.

While not reaching the heights of his previous series, “Strangers in Paradise XXV” #10 brings the perfect conclusion to this project, despite the many hiccups along the way. I leave this series satisfied that it exists and glad I followed along. For a sequel to four different series, that is something not everyone can do.

Final Score: 8.0 – Moore’s strong character work, animated lettering and always stellar artwork turns what could’ve been just an OK conclusion into one that provides the right balance of closure and open-endedness. Despite “SiP XXV” ending, the door is still open and I cannot wait to see what comes next.