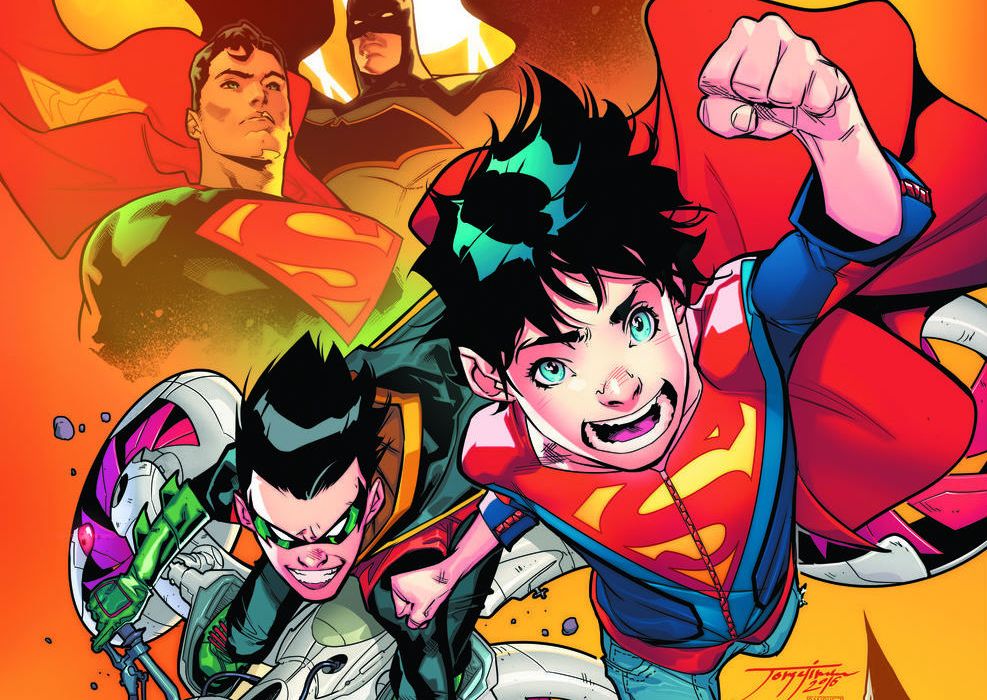 There’s nothing like seeing a young hero grow into their own, find their place in the comic universe, and forge friendships among their peers. Put an accomplished writer like Peter J. Tomasi behind it, combined with the artwork of Jorge Jimenez, and you’ve got a winning formula. So let’s see how the first issue of “Super Sons” goes. 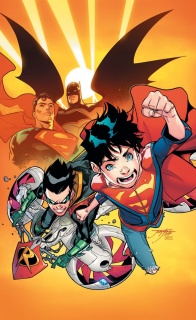 Written by Peter J. Tomasi
Illustrated by Jorge Jimenez
“When I grow up” part one! The sons of Batman and Superman have graduated to their own monthly comic—but if they want to survive, they’re going to have to share it! Writer Peter J. Tomasi (BATMAN & ROBIN, SUPERMAN) teams with rising-star artist Jorge Jimenez (EARTH 2) to bring you the adventures of the World’s Smallest. This debut issue looks at the lives of Robin and Superboy and their destiny to follow in their fathers’ footsteps, while we meet a new villain whose ascension parallels the boys’ own understanding of their powers—except that he believes it’s his right to rule over every being on the planet!

Has there ever been a duo like Batman and Superman? Each represents the best of humanity in their own unique ways, while still remaining perfectly juxtaposed. When stories use them right, we get brilliant storytelling about characters who are so different yet work together perfectly. When stories use them wrong…well, it would be too easy to make a “Martha!?” joke, so I won’t.

However, this isn’t about Superman or Batman – its about their sons. Damian Wayne has been around for a fair amount of time; he’s established himself as a Robin, built bonds with the rest of the Bat Family, joined the Teen Titans, even died and came back. But Jon Kent doesn’t have quite the same history, as his story is still being forged.

Fortunately, Peter Tomasi does a great job establishing both their characters early on in the story. Through an in media res opening, we get to see how they work together and off each other, complete with some adorably childish banter, and ending on a full-page panel that certainly catches the reader’s attention.

We get the most out of Jon’s character, since the story follows him throughout his day, with Damian popping up now and again. We immediately get a good grasp of his personality, as he steps in to protect his friends from bullies, albeit slightly cliche bullies (spitballs and rocks in snowballs…still certainly a thing bullies do, but also the thing every fictional bully does). His first encounters with Damian serve well to set up how their characters work off one another, and there’s just the right balance of distrust and reluctant respect to work.

The visual juxtapositions are quite nice too, with Damian’s typical angsty scowl up against Jon’s widely smiling face. Jorge Jimenez does a great job at making everyone very expressive, and I love the look he puts on Jon’s face as Damian disguises himself as a bus driver (the disguise itself is also very cleverly-drawn).

The contrasts go further both thematically and visually when we see their family lives. As always, the Batcave is quite dark, relying on gray and black shades for most of the decor. Compare that with the brightly lit scene of Jon at home, and the warm colors that fill the pages (big props to Alejandro Sanchez for the color work on these scenes). We go from Batman in his cowl and scowl to the Kents smiling widely as they connect with their son, and it illustrates the differences in their worlds perfectly.

The scenes even parallel each other in how they unfold. When Superman needs to fly off, he gives his love to his family and takes to the sky; when Batman needs to go, he tells Robin to do his homework and drives off. The two work so well when put up against each other.

Of course, Tomasi is no stranger to Batman and Robin, having spent a fair time writing them. So it’s no surprise that he does a fine job with Damian’s character. He’s also written a fair amount of Superman, including a few issues of “Batman/Superman,” so he’s a fine choice for the team-up of their children.

So it’s properly established how different the characters are, as any good “World’s Finest” pair should. But that’s only half the equation – how well they work together matters too.

As mentioned earlier, I love the little arguments they have. “I’d blast you!” “Well I’d dodge it and kick you.” “Well I’d dodge the kick and punch you!” (I paraphrase, but it’s that type of argument; you know you’ve had that exact kind of fight as a kid). It’s a nice little rapport between two characters who really are children, albeit children with skills, powers, and a desire to put their abilities to use. It’s also adorable to see Superboy worry about getting in trouble for going out to fight crime after his bedtime.

Once more, Jimenez does an excellent job with the characters and scenery. In one page we get two great shots – one of the figures silhouetted as they leap across the rooftops of Metropolis, lightning flashing in the background, the other with the two of them standing on the roof, illuminated by the city lights. I love the design of Jon’s Superboy outfit – the way the shirt combines the cape look and a hoodie sweater is a neat little design, and the tears in his jeans add character to it. Seeing him and Robin side-by-side, both their capes fluttering in the rain and wind, it’s a great scene.

So the first issue does a great job at establishing the characters, letting them play off each other, and setting them off as a team. It looks great, it’s fun to read, and it flows nicely all the way through. A great start to what I hope is the next step in the growth of the characters.

Final Verdict: 8.9 – The sons of Superman and Batman have the same great chemistry as their fathers, and I look forward to seeing how they grow together.