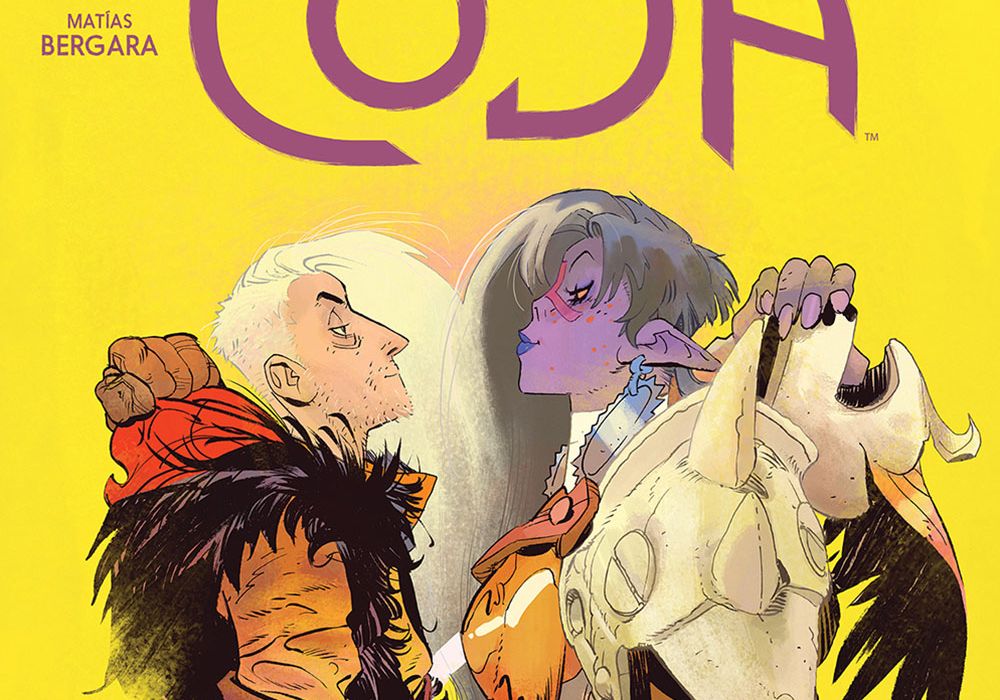 There’s something really special going on in the pages of Simon Spurrier and Matias Bergara’s “Coda.” After singing the premier issue’s praises three months ago, I was a bit hesitant to jump into the successive issues, worried that the story would not live up to the promise of that first issue, but my fears were completely unfounded. “Coda” from Boom continues to excite with remarkable draftsmanship from Bergara and clever and organic scripting from Spurrier. 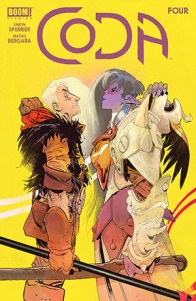 Having successfully warded off Thundergog from its assault on Ridgetown for at least one more day, Hum turns his attention to the Urken soldier who turned the tides of the battle…

What the creators of “Coda” have done so well is to strike a balance between adult-themed sword-and-sorcery epics and retro Saturday-morning-style fantasy cartoons and have it not feel alienating to fans of either genre, but the balancing act doesn’t end there. Bergara’s artwork is both lush and spartan. Spurrier’s script is both modern and arcane. The characters are bizarre yet relatable. And what readers were certain would be the driving force of the narrative over the bulk of the first three issues is upended in the final pages of the issue three and masterfully developed in this fourth issue.

The issue opens with our bard’s retelling of the events surrounding the quench, the event that all but abolished magic from the face of the earth, and it’s depicted in a sketchy monochrome by Bergara that is evocative of the best cinematic fantasy preludes that set the stage for the adventure about to unfold. But this is issue four, you say. Well, it turns out that saving this bit of exposition for this point in the story allows readers to better understand both the plot developments that have preceded its reveal and the specific events that take place in this issue, namely, what is the true nature of Hum and Serka’s relationship? Pulling the rug out from under the traditional hero’s quest trope (that’s okay, Hum hated that word anyway), Spurrier gives us the makings of a different journey, and a remarkably commonplace one at that: What would you do to live in peace and prosperity as the world continues to tear itself apart? At times, “Coda” almost reads like an extended parable, but it never feels didactic (another balancing act). The narrative doesn’t waste time preaching, instead it reveals lessons through the way characters interact with one another. Several times throughout the series, Hum has commented on how much the world has changed and yet stayed the same. This is not an indictment of those with whom he comes in contact because it includes his own selfishness. When the young street urchin that travels in Hum’s wake sees through his romanticized mission as a cover for the very mundane desire just to live unfettered, Hum lashes back that Serka could change the world. But it’s lip service. The world, by Hum’s own admission, doesn’t change. “Out of the mouths of babes…”

Bergara’s linework continues to be a revelation. At times it appears simple, but there is an astonishing amount of interesting and expressionistic detail in each panel if readers let their eyes linger. There is a Mad Magazine quality to his renderings of body language and facial expressions, exaggerated and elastic but still grounded in physics and reality (another balancing act if you’re keeping score). The color palette continues to largely be a mix of soft pastels only occasionally intermingling with high chroma colors. There’s a gauzy and dreamlike psychedelia to the pages of “Coda” that gives this world an edge of softness even as the world depicted contains very real and very weird dangers. Shapes evoke those formed by a lava lamp. This is definitely not the same fantasy world as Frank Frazetta’s mist-covered, muscular, and darkness-cloaked depictions, and it befits Spurrier’s off-kilter script that is highlighted by inventive and frequent plot twists and witty rapid-fire dialogue.

In the final pages, when Hum and Serka visit Murkrone, the corpulent mermaid gangster from the premier issue who may hold the keys to Serka and Hum’s happiness, Spurrier perhaps gives readers another clue to the what is at stake here, and it’s not the fates of kingdoms. As the series progresses, Hum may be forced to choose between saving the one he loves from her curse or learning that love is about not needing to change someone and accepting them for who they are. Perhaps Serka’s cursed existence is the only reason she feels compelled to do some good in the world and curing her of that curse would rob that world of her gifts. For now, we can only surmise what Hum’s rash act in this issue will lead to, but we can probably correctly guess that one of the driving forces in Hum’s continuing story is that love makes us do crazy things.

Final verdict: 9.0 – “Coda” remains a raucous and irreverent delight even as it wears its love story heart on its sleeve, but with issue 4, Spurrier and Bergara remind us that love can be messy, even in fantasy worlds.