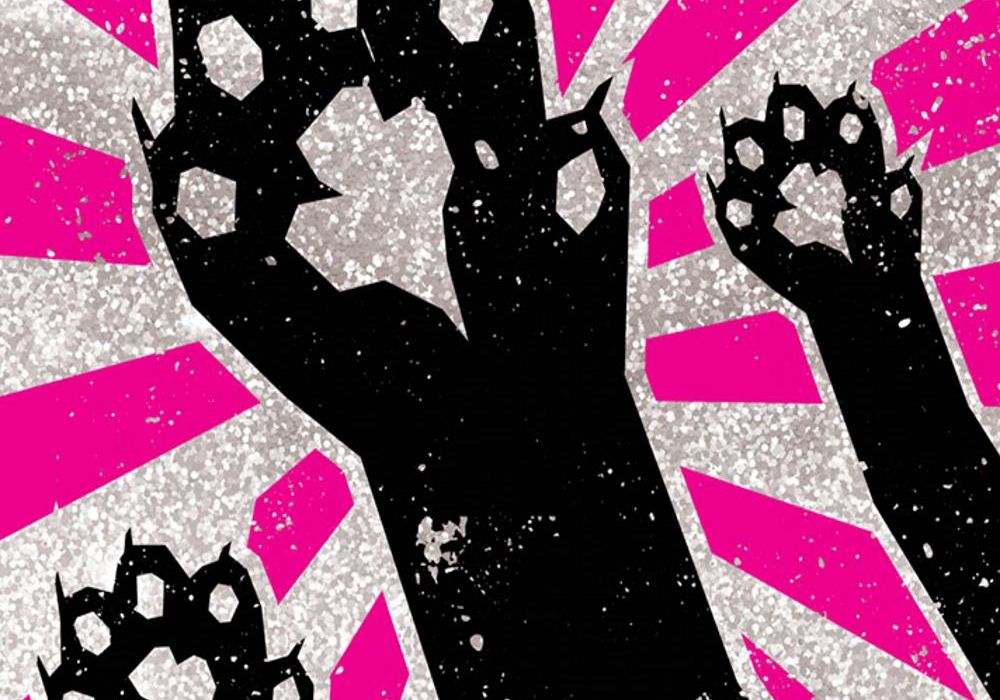 After the high profile cancellation of “Mockingbird” and subsequent non-release of her run for “The Vision” with Marvel, twice-bitten writer Chelsea Cain and The Ministry of Trouble were left with some serious unfinished business. With “Man-Eaters” #1, Cain and her cohorts are back. This isn’t your father’s comic. Seek shelter immediately. (Warning: contains minor spoilers.) 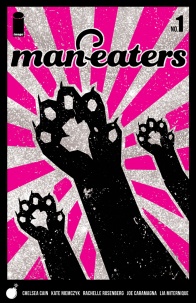 Eisner-nominated and New York Times bestselling thriller writer CHELSEA CAIN returns to comics with a new ONGOING SERIES! A mutation in Toxoplasmosis causes menstruating women to turn into ferocious killer wildcats—easily provoked and extremely dangerous. As panic spreads and paranoia takes root, the fate of the world rides on the shoulders of one twelve-year-old girl. Part Cat People, part The Handmaid’s Tale, MAN-EATERS will have everyone talking. From the creative team behind the Eisner-nominated series Mockingbird: writer CHELSEA CAIN, artist KATE NIEMCZYK, colorist RACHELLE ROSENBERG, letterer JOE CARAMAGNA, and joined by LIA MITERNIQUE, KATIE LANE, and STELLA GREENVOSS. This September… the cat wants in.

“Man-Eaters” #1 begins with the common pop culture trope of a tween protagonist lost in the world of make-believe, subtly probing something deeper by acting a story out loud. Unlike the opening sequence of Stranger Things or “4 Kids Walk into a Bank,” however, the narrative framework isn’t “Dungeons & Dragons” or anything like that.

Instead, in a simple but brilliant twist, the action figures are tampons. It’s a droll, provocative, unambiguously defiant choice that not only strips away the masculine veneer of fantasy role playing games and other typically male dominated spaces within nerd culture, it heightens and exploits male discomfort with female bodies (and female bodily functions) to immediately and unequivocally set the tone for the rest book.

Indeed, at the end of the opening sequence (removing any shred of doubt about one of book’s key themes), Cain proclaims through her avatar, Tampon Woman, “The personal is political!” as the cape wearing cartoon tampon flies toward Mr. Misogyny to thwart his nefarious plans. It’s not exactly subtle, but it is funny as hell, cheeky and self-assured, with an unflinching authorial attitude that was clearly forged in the relentless inferno of social media throughout the past two years.

Clearly, as Cain herself has said in numerous interviews, she’s not afraid any more and refuses to be cowed by vitriol, harassment and personal attacks. Here, on the very first page, her message is crystal clear: you thought my so-called feminist agenda was aggressive before? Well, here’s a flying tampon to smash the patriarchy.

Like the first page of the story, the entire book is masterfully constructed, with outstanding panel and page compositions, pitch perfect dialogue, an immediately likable, highly engaging narrator and phenomenal attention to detail throughout, including fictitious front and backmatter that adds even more wry wit to the story.

In fact, much like the ongoing series “Bitch Planet” (conspicuously referenced by a poster on a teen girl’s bedroom wall), the story actually begins on the title page, which doubles as a poster warning the public to beware of nearby wild cat attacks. Here, we also learn of Toxoplasmosis X, the science behind the phenomenon of menstruating young women who turn into bloodthirsty wildcats. Later, this poster reappears in the hands of a S.C.A.T. (Strategic Cat Apprehension Team) official. Complete with a supplement at the end (“paid for by men and boys”) that includes a handy checklist of potential cat attack warning signs, a blank “incident report” and more, this is a highly packaged, well curated experience from beginning to end.

Visually, Kate Niemczyk’s illustrations are simple and highly efficient, yet somehow packed with nuance and occasional Easter eggs. You’ll want to linger over the scenes to catch her sly visual references and subtle metacommentary. This is a book that knows it’s a book, brilliantly situated the fictitious “near future” that we experience every day, in our actual lives and on our devices. Niemczyk’s largely unadorned version of stylized realism (check out her Time magazine cover) perfectly captures our cyclical, self-referential, media obsessed early 21st century existence. Rachelle Rosenberg’s colors – unsurprisingly, heavy on various versions of pink, rose and red – are generally subdued and highly effective, grounded in reality while also larger than life.

Everything else aside, Chelsea Cain’s story structure, timing and narrative flow are impeccable. Somehow, Cain deftly interweaves the distinctive voice and point of view of her first person protagonist Maude with flashbacks, asides and subtle shifts to third person without stumbling or missing a beat. One minute we see the world entirely through Maude’s perspective. The next minute, we’re omniscient, popping through time and space to witness something well outside Maude’s actual lived experience. And yet, the story always feels seamless, never weird or disjointed, adhering closely to Maude’s tone of voice, as though seen through her character’s eyes. It’s a fascinating effect and one that very few writers can even hope to pull off.

In the end, one might possibly quibble that not a whole lot happens in this debut issue, but not a whole lot needs to. After bonding with the narrator Maude for the first twenty pages, the last page will give you chills. This is an exceptionally well made first issue. All of the pieces are here. Shit is about to go down. The Ministry of Trouble has assembled and they are ready to pounce.

Final Verdict: 9.6 – Chelsea Cain is back. She and her co-creators have set the stage brilliantly for what promises to be a wild, politically charged and highly entertaining story.