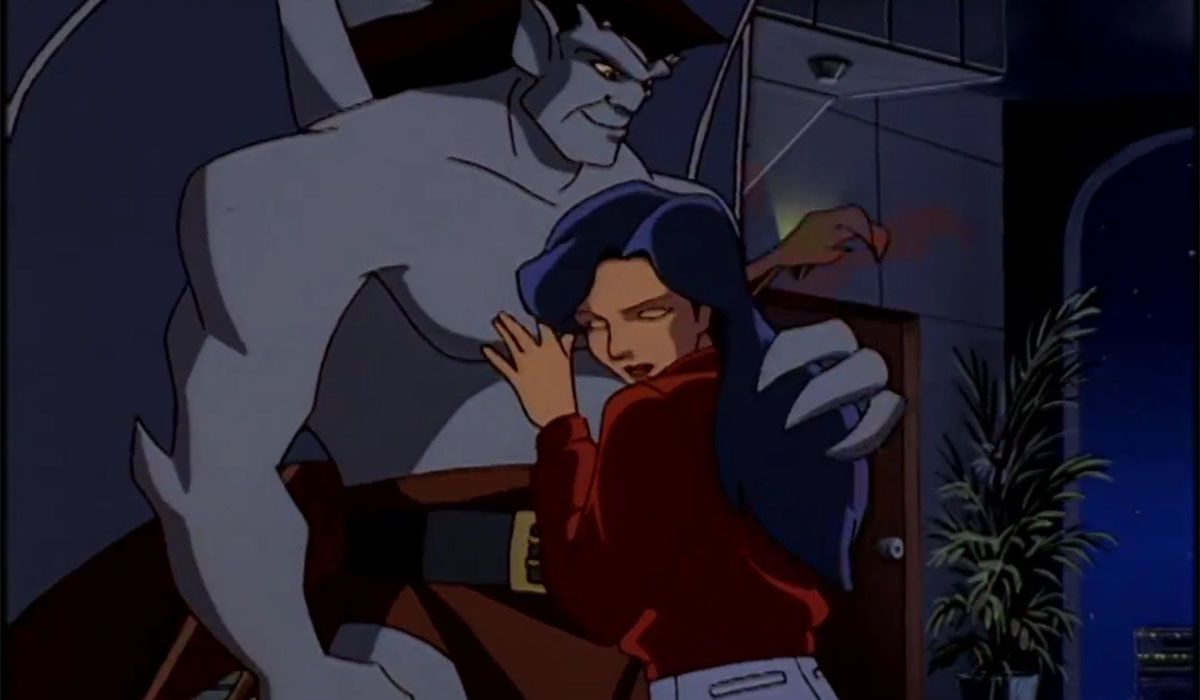 We come to the end of our Gargoyles retrospective with a look at Goliath Chronicles‘ finale, “Angels in the Night,” aired February 15, 1997. The last episode sees most of the gargoyles seemingly killed after being lured into a controlled detonation, and Angela being framed and arrested for the attack by the Quarrymen – a fateful battle soon ensues on the train transporting her that will decide humanity’s opinions of the gargoyles once and for all…

1. Ending on a High Note

This was good! I think Nelvana benefitted from the Christmas break after the previous run from November 1996, and this dynamic and fluidly animated episode feels like the first two seasons, unlike their previous stiff and oddly saturated work. (Even the new character models don’t look ugly.) The subterfuge that comes from Xanatos fooling the Quarrymen into believing they killed the gargoyles offers some emotional twists, and the thrilling climax, in which Brooklyn finally uses his smarts to save all the humans on board the train, ends the show on a lovely, optimistic note – you get a real sense of what Goliath Chronicles could’ve been had it continued.

This Oswald Mosley-lookalike has been leading the Quarrymen since the start of the season, and yet it’s only in this episode we finally get some backstory on him, when we learn he’s an industrialist who owned the construction site the male gargoyles were lured into. Makes sense, it’s very realistic that someone so wealthy would lead a hate group, but he remains a thinly sketched and boring antagonist. Because I do do the reading, I learned Greg Weisman intended Castaway to be the new identity of Jon Canmore, the younger Hunter brother who had a mental breakdown – it’s such a shame the show never acknowledged that, as it would’ve enriched the character in a snap. 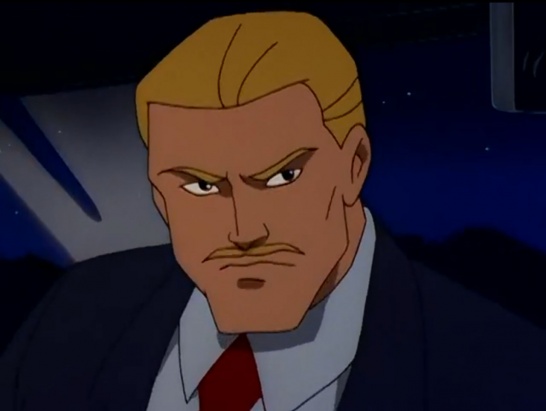 He probably twirls that mustache.

Xanatos bribing the Quarrymen tasked with trapping and killing the gargoyles implies the show might’ve come to a natural end though. Between that and saving the younger trio from the Illuminati’s clutches two episodes before, he’s become a crutch for the writers when they’ve written themselves into corner, with his money and connections being used as a bail card. Still, there’s a tantalizing moment when Xanatos suggests the gargoyles use this opportunity to permanently fake their deaths and relocate: it’s a nice hint of the ruthless, selfish man he used to be, that could’ve been mined for more interesting conflicts between him and Goliath even though they’re now friends.

Maybe it was sitting through this inconsistent third season, or critiquing the show for the past two years, but I’m simply not sure if the notion of a live-action Gargoyles is as fullproof as I’ve always believed it would be. Now, Gargoyles is an incredibly intelligent, gripping and dramatic piece of children’s TV that paved the way for the likes of Avatar or Trollhunters, and it has aged a lot better than many ’90s superhero shows, but it can also be melodramatic and convoluted. 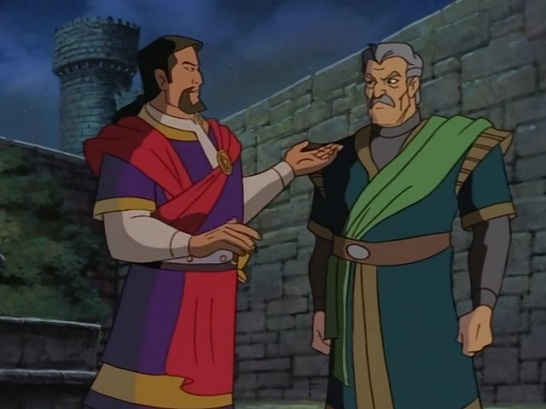 Yes, I still think the time travel in Xanatos's backstory is a load of malarkey!

Often the show felt like it was rushing to build a mythology to rival Marvel and DC: how did this show become about a billionaire who married an elf’s daughter? And how convenient is it that only Demona and MacBeth can kill each other? Greg Weisman has admitted a significant part of Gargoyles‘ run, like the ‘Avalon World Tour’ arc, was created so Michael Eisner could build a Marvel rival. But of all the spin-offs planted during that arc, surprisingly few could build a sustainable shared universe: the rest are more Gargoyles basically. (What I’m saying is, Japanese gargoyles don’t need to be stone by day.)

I think I’d be more forgiving of Gargoyles‘ flaws if it had continued and expanded into the 2000s à la Batman: The Animated Series‘ evolution into Justice League Unlimited – for now, it is a great unfinished symphony. Any filmmaker who tackles the source material would have to think about a lot more than whether to use the Steel Clan in a first movie: namely, they’d need to know how to properly foreshadow the reveal Puck is Xanatos’s assistant, or really, what the Archmage’s whole deal was (anyone?).

5. Does Gargoyles have a future?

Greg Weisman said, “Here’s a hard truth: Disney bought Marvel and Lucasfilm. Why take a chance on a 25-year-old action property that (to their mind) has an aging/shrinking fanbase when you can exploit sure things like Star Wars and Spider-Man?” It’s weird to think of 20-somethings like myself as an aging fanbase, but sure: the show ended over 22 years ago, the comics ended a decade ago, and so did the Gathering of the Gargoyles conventions. It’s not an active franchise: the only things released this decade were Volume 2 of the Season 2 DVD, and Funko Pop! figures. Even working at Lucasfilm and Marvel on projects like Star Wars Rebels didn’t give Weisman the clout to revive the comic or cartoon. 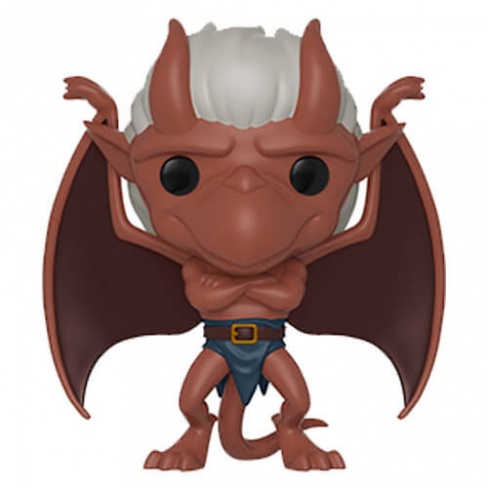 Brooklyn doesn't know how to feel about this.

I’ll always remember when writer Chris McFeely quipped that ’90s kids have less disposable income than ’80s kids, which explains why Hollywood was quicker to capitalize on nostalgia for Transformers or He-Man than Gargoyles. But there is a big ray of hope on the horizon: Disney+, which will give a whole new generation across the globe a chance to discover and fall in love with the show, and hopefully cause a much greater hunger for more, so much so that Disney will finally answer Jordan Peele’s calls. (How many more Oscars must the man win anyway?)

Yes, a Gargoyles movie could go the way of John Carter or A Wrinkle in Time, but Disney needs to infuse its live-action films with something new now and again, and they’re running out of animated films to remake in live-action. I know that sounds cynical, but hopefully it’ll mean we’ll finally see live-action Goliath et al. sooner rather than later – after all, the world could always do with more of our beautiful, resourceful Black/Native American heroine Elisa Maza.

Bonus thoughts:
– The episode opens during Chinese New Year: perhaps it was for the best the show avoided Chinatown until now (the Scottish accents were bad enough), but still – better late than never I suppose.
– Margot Yale, the yuppie lawyer voiced by Marina Sirtis in the first two seasons but by Tress MacNeille in Goliath Chronicles, plays a major role here, having been promoted to become the assistant DA. (I suppose it makes sense now why they recast the role.)
– Brooklyn’s still fantasizing about female gargoyles from other parts of the world, heh.
– The shaky-cam during the climax does get a little irritating.

Well, this is my last retrospective of the show: if you’ve been reading any of this column since I began last summer, then thank you. I’d love to do a Summer Comics Binge of Slave Labor Graphics’ series, which I’ve acquired the single issues of thanks to fellow staff member Nicholas Palmieri: if you could scroll down and drop me a line to help track down the remainder of the run, which was only printed in trades, I’d be most grateful. Hopefully, I’ll see you all around for the revival.

“One thousand years ago, we lived in a world that understood our purpose. It was the age of Gargoyles. Ten centuries later, we awoke to a world bent on our destruction. Somehow, we never lost hope, and today we come full circle. A new age has begun, and we live again.“