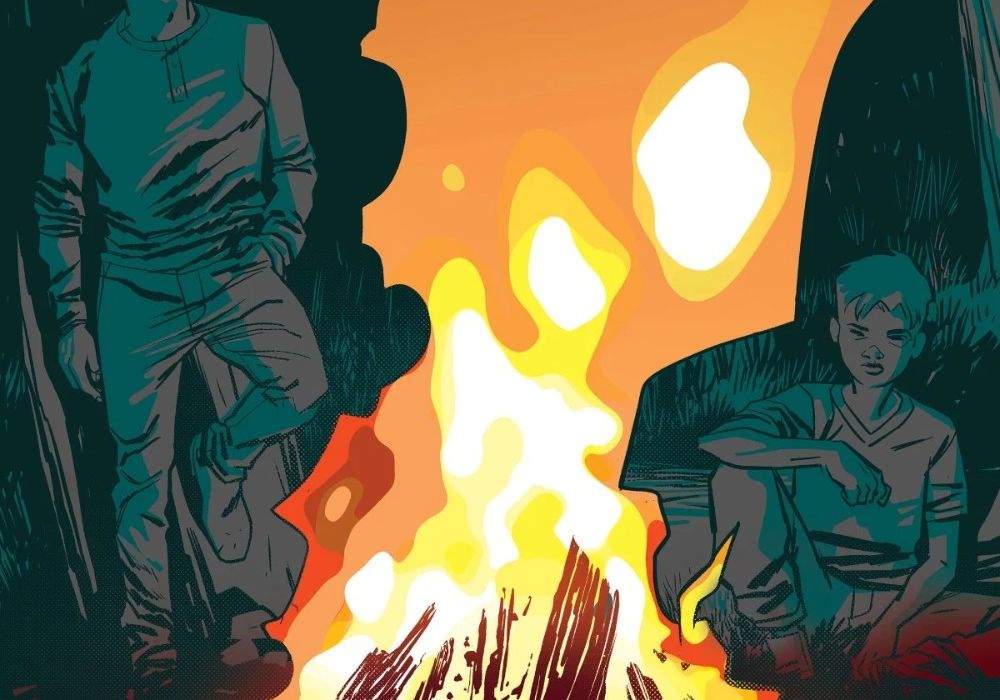 In case you missed it, Mike Mignola and Greg Hinkle are teaming up for “Radio Spaceman;” franchises are colliding with “Godzilla vs. the Mighty Morphin Power Rangers;” DC Black Label unveiled “Rogues;” the Grishaverse is coming to comics in “Demon in the Wood;” and AfterShock announced their Free Comic Book Day issue “Bunny Mask Tales.” “New Champion of Shazam” was also reportedly delayed indefinitely, and we had an exclusive preview of Marvel’s “Phoenix Song: Echo” #3. 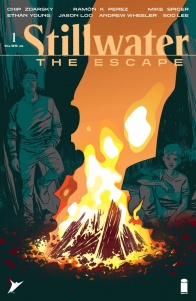 – The Image/Skybound series “Stillwater” has set a new one-shot for next year. Via DailyDead.com, “Stillwater: The Escape” revisits the titular town where no one dies through the lens of the few who have managed to free themselves from the town. The supersized special sees the Eisner Award-winning creators Chip Zdarsky and Ramón Pérez teaming up with Ethan Young, Jason Loo, Andrew Wheeler and Soo Lee for a story that will “bring you the answers before the final chapter of Stillwater begins.” “Stillwater: The Escape” runs for the shelves on March 9, 2022.

– Also at Image, writer Tyler Burton Smith (the Child’s Play remake) and artist Vanessa Cardinali (“Jesus the Christ: Dinosaur Slayer”) will collaborate on “Slumber,” an ongoing horror comedy about a nightmare hunter. Via ComicOn.com, the book follows Stetson, a woman paid to enter people’s dreams and kill their nightmares, who goes on the hunt for a serial killer that murders people in their sleep. “Slumber” #1 hits stores March 16, 2022.

– Erica Slaughter is set to return with a new mission when BOOM! Studios’ “Something is Killing the Children” returns from its hiatus in the spring. The hit series from James Tynion IV, Werther Dell’Edera, Miquel Muerto and AndWorld Design will pick back up with issue #21 one year after the events in Archer’s Peak. Having broken ties with a none-too-happy Order of St. George, Erica is on the hunt for a new kind of monster, one with “terrifying implications.” “Something is Killing the Children” comes out of the dark in March 2022.

– Writer Dan Slott and artist Javier Rodriguez are shining a spotlight on the Watcher for the ‘Reckoning War’ one-shot “Reckoning War: Trial of the Watcher” next spring. The Watcher will reportedly play a central role in the Marvel event that is set to shed light on the so-called “First War” that preceded Asgard and Galactus. ‘Reckoning War’ mastermind Dan Slott is partnering with Javier Rodriguez for the one-shot, which will detail the only “What If” world that Uatu has avoided watching. “Reckoning War: Trial of the Watcher” #1 dares to face the unknown on March 16, 2022.

– A trio of Doctor Who comic one-shots are also on the way from Slott. The Marvel writer will team up with artist Christopher Jones for three special annuals focusing on the Tenth Doctor and companion Martha Jones, with the first due out next year. The story will find Martha captured by the Pyromeths, where “her only hope for survival is to keep them distracted with sensational untold tales of the Tenth Doctor facing off against his greatest foes – both classic and new!” “Doctor Who: Special” #1 hits shelves April 2022.

– The full line of Free Comic Book Day titles has been announced for the event hosted by Diamond Comics Distributors next year. The selection includes titles from across the publishing landscape, including the YA “The Walking Dead” series “Clementine,” “Avatar: The Last Airbender/Legend of Korra,” “Jonna and the Unpossible Monsters,” “Dav Pilkey’s Dog Man & Friends Super Comic Teaser,” and “Stranger Things/Resident Alien.” Notably sitting out the proceedings this year is DC Comics, who parted ways with Diamond last summer in favor of Lunar Distribution. Although Marvel similarly split from Diamond as a distributor, Marvel opted to retain Diamond as a wholesaler. Marvel will have two titles in the FCBD mix this year, a gold “Spider-Man/Venom” issue and a silver “Avengers/X-Men” issue. The 2022 Free Comic Book Day will take place on Saturday, May 7.

– IDW Editor-in-Chief John Barber is stepping down from his role today, as announced by Barber on Twitter. Barber had formerly served as the IDW Hasbro Group Editor when he was rehired to take on the role of Editor-in-Chief in 2018. He had previously taken a two-year break from editing to work as a writer before rejoining IDW. Barber departs to, per his Twitter, “pursue new creative endeavors.”

– Via The Hollywood Reporter, Warner Bros. and DC’s Blue Beetle movie will no longer be a HBO Max exclusive, and will instead receive a theatrical release on August 18, 2023. The film, directed by Angel Manuel Soto (Charm City Kings), will star Xolo Maridueña (Cobra Kai) as Jaime Reyes, the teenager who bonds with an alien suit of armor.

– Netflix’s upcoming live-action adaptation of Avatar: The Last Airbender has added to its cast, including several popular female characters from the cartoon. Via ComicBook.com, the new cast members include Elizabeth Yu (All My Love) as Azula, newcomer Maria Zhang as Suki, Tamlyn Tomita (Cobra Kai) as Suki’s mother Yukari, Yvonne Chapman (Kung Fu) as the Avatar Kyoshi, and Casey Camp-Horinek (Reservation Dogs) as Katara and Sokka’s grandmother Gran Gran. The casting likely confirms the inclusion in the series of the Kyoshi Warriors, a group of women warriors (including Suki) named after Avatar Kyoshi, who protect their home island by wielding metal fans. The live-action adaptation is currently in production in Canada.

– Finally, Danny Elfman will be reuniting with his longtime collaborator Tim Burton for the upcoming live-action Netflix series Wednesday. Via The Hollywood Reporter, the series, based on the Addams Family franchise created by cartoonist Charles Addams, will feature Elfman working alongside composer Scott Bacon (Bates Motel). The “supernatural infused mystery” focusing on Wednesday Addams as a student at Nevermore Academy was ordered to series back in February. Wednesday features Burton as executive producer alongside showrunners Al Gough and Miles Millar; Burton will direct the pilot and several episodes of the show. This isn’t the only comic adaptation reteaming that Elfman has set for next year, as he’s working with his Spider-Man collaborator Sam Raimi for Marvel’s Doctor Strange in the Multiverse of Madness. Wednesday meanwhile is scheduled to premiere next year. 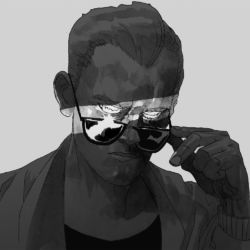 Welcome back to The Rundown, our daily breakdown on comic news stories we missed from the previous day. Have a link to share? Email our team at rundown@multiversitycomics.com.In case you missed it, AfterShock announced “Kaiju Score: Steal From the Gods,” and Mignolaversity took a look at April’s releases.– DC Black Label announced “The Sandman Universe: […] 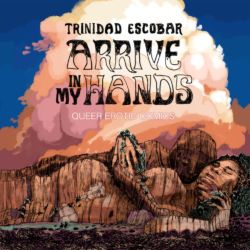 Welcome back to The Rundown, our daily breakdown on comic news stories we missed from the previous day. Have a link to share? Email our team at rundown@multiversitycomics.com.In case you missed it, Shinji Mizushima, the creator of the long-running baseball manga “Dokaben,” passed away from pneumonia last week on January 10, 2022. In other news, […] 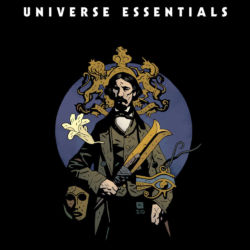 Welcome back to The Rundown, our daily breakdown on comic news stories we missed from the previous day. Have a link to share? Email our team at rundown@multiversitycomics.com.In case you missed it, DC Comics announced a new mini-series called “Flashpoint Beyond,” whilst Marvel announced a mini-series of their own with “X-Men ’92: House of XCII.”– […]